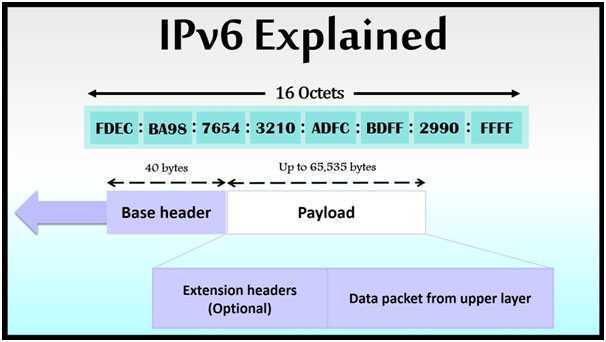 IPv6 became a draft standard for Internet Engineering Task Force (IETF) on December 1998, but on 14 July 2017, it became the Internet Standard through official consent. After 1990, the IETF became aware of the fact that with the rise of internet users much-developed Internet Protocol is needed. Around 1998, IETF finalized the formalities for the next-generation Internet Protocol.

The IPv6 uses 128-bit address instead of 32-bit like its predecessor, the IPv4. Theoretically, it can allow 2^ (128), or 3.4×10^ (38) addresses. The actual amount of address available is 7.9×10^ (28). The declined number is due to the reserved addresses for special use. Both the versions are designed to avoid working with each other, but the transition mechanism of the later version can communicate between the two hosts.

It also provides technical advantages other than providing a very large address space for both present and future internet users. It allows hierarchical address allocation method. The combination of two or more networks became easy with the latest Internet Protocol. It also limits the expansion of the table in the router that contains the lists of the network destinations.

During the design of the latest version of Internet Protocol device security, configuration, and mobility are also considered. The address has eight groups separated by a semicolon.

It is devised to provide Internet Layer for transmitting packets of data across the digital network. It also provides end-to-end service for the packet-switched network across different Internet Protocol networks.

The payload contains the actual data that are needed. In simple words, headers help to transmit the payloads.

BayInfotech has unlocked the full potential of the latest Internet protocol Version in cloud computing. It gives full control of the business to the client along with an extension of the recourses. These extensions do not use IaaS, PaaS, and SaaS.